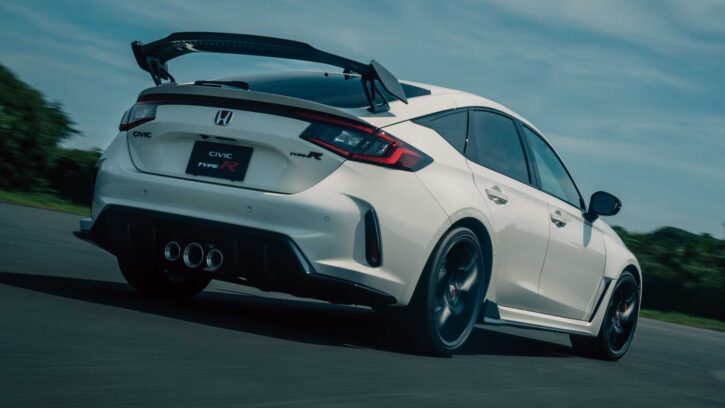 The new Civic Type R has been toned down visually compared to its predecessor as the FL5 looks quite tame. Some would argue that’s for the better since the aggressive styling of the FK8 with its fake vents gave the hot hatch an overly complicated exterior appearance. Those hoping for a bit more visual drama will likely have to wait for in-house tuner Mugen to release upgrades as these new Honda Access items don’t necessarily make it look wilder.

Revealed for the JDM-spec CTR, the goodies start on the outside where there’s a new rear wing made from carbon fiber to shave off 1 kilogram (2.2 pounds) compared to the standard setup. There are also red side mirror caps to complement the brake calipers as well as the Honda badges and prominent R letter on the grille and tailgate.

As if the interior wasn’t red enough, the gear knob made from anodized aluminum for the six-speed manual transmission can be wrapped in red leather to match the front seats and floor mats. The area surrounding it is made from the same carbon fiber used for the rear wing, complete with red accents. Miscellaneous items vary from Type R door projectors and LED ambient lighting to carpets and even the Euro-spec horn.

From paint protection film to a wireless charging pad, Honda Access has quite a few items ready for the new Civic Type R. You can rest assured aftermarket specialists will release substantial upgrades in due course, and whatever power the 2.0-liter turbocharged engine makes, tuners will definitely want to extract more.

Based on unconfirmed reports, the four-pot produces 326 hp (243 kilowatts) and 420 Newton-meters (309 pound-feet) of torque at home in Japan. Honda will sell the CTR strictly as a five-door hatchback with front-wheel drive and a manual transmission. Full details are going to be disclosed closer to its launch this fall, but the first European deliveries won’t take place until early 2023.