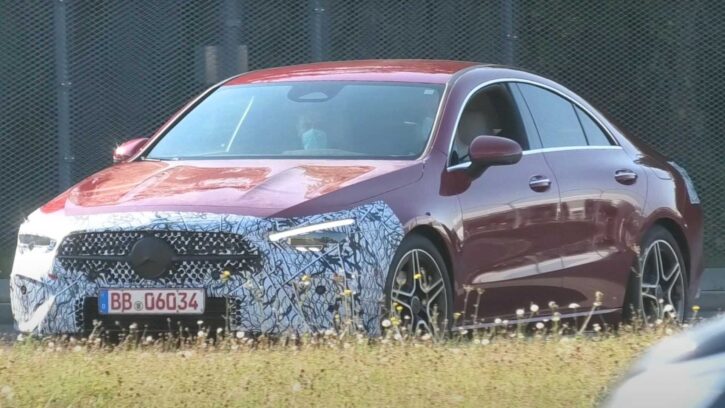 Mercedes-Benz introduced the current-generation CLA-Class in 2019, so it’s high time that we see a refreshed version being tested. Thankfully, YouTuber walkoARTvideos caught one in Germany trying to hide the changes under camouflage.

Just like the Mercedes A-Class it is based on, the CLA facelift prototype that was caught only has its front and rear fascia concealed, hinting that only minor changes are happening. A few nips and tucks there, along with redesigned lighting elements are expected. There could be changes on the bumpers, seeing that the prototypes come with concealments on those areas as well. These don’t come as a surprise as this is just a mid-cycle refresh.

Inside, substantial changes are inevitable, mostly to update the swoopy sedan to keep up with the times. A revised center console and instrument panel won’t’ be surprising, which should go with the brand’s latest MBUX infotainment software.

Under the hood, Mercedes will most likely offer the same powertrain for the facelifted CLA. The turbocharged 2.0-liter inline-four should carry on, mated to a seven-speed dual-clutch automatic. The all-wheel-drive 4Matic version should also be on offer. The more powerful AMG versions are also likely happening, which should be the entry-level AMG models for the US market.

Speaking of the A-Class, the refreshed version of the entry-level Merc has also been spotted testing earlier on. We expect Mercedes to unveil the facelifted model this year for the 2023 model year. If the rumor mill holds true, this will be the final version of the A-Class, which will be axed in 2025 along with the B-Class.

Of note, the refreshed A-Class won’t make it stateside as Mercedes is planning to retire the model in the US after the 2022 model year. This will effectively make the upcoming 2023 CLA the entry-level Merc for the US market, making its debut sooner rather than later.