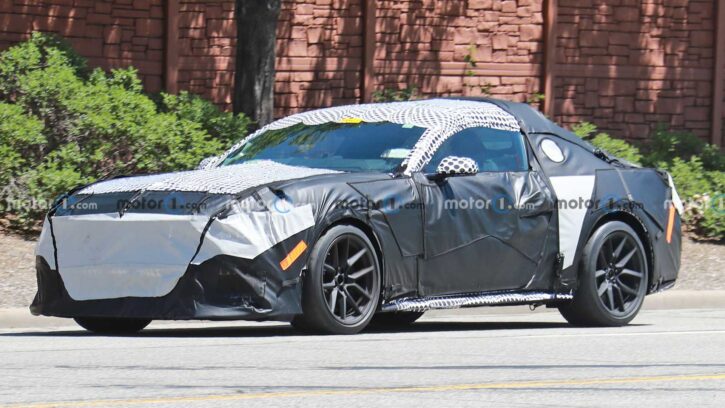 A new rumor in the pony car world claims the seventh-generation Ford Mustang could arrive sooner than expected. Automotive News cites an unnamed source as stating the 2024 Mustang will debut in September at the 2022 North American International Auto Show in Detroit.

There is no information regarding the source, other than it being a person familiar with the plans. Motor1.com contacted Ford directly regarding the rumors; a spokesperson offered no comment regarding a possible debut at the show while offering this information:

A previous report from Car and Driver speculated the new Mustang could debut on April 17, 2023, coinciding with the pony car’s original debut on the same date in 1964. The rumor wasn’t substantiated by any sources, but there’s undeniable symmetry in debuting a new Mustang on the anniversary of the first-generation reveal. However, a debut in September could open the door for Ford to do something else Mustang-related on April 17, such as opening order banks or even starting production. At this time, nothing is confirmed regarding the debut.

What information is confirmed for the seventh-generation Mustang? We know a V8 engine will return – we’ve clearly heard a V8 rumble from test vehicles caught on video. We’ve also had direct confirmation from a Ford executive. The seventh-generation Mustang is also confirmed for 2024, as Ford already has plans to go racing with a new GT3 version. As with the current model, the assembly will take place at Ford’s factory south of Detroit in Flat Rock, Michigan.

Beyond that, it’s highly likely the new pony will launch with EcoBoost four-cylinder and V8 engines largely carrying over from the current model. Ford’s official seventh-generation Mustang announcement included an image of a manual gear knob in the text, so we believe the six-speed stick will still be available as well. Rumors also persist of a hybrid Mustang showing up at some point, possibly working with the V8 to offer a supremely powerful all-wheel-drive version.

We’ve had numerous sightings of camouflaged Mustang test vehicles in recent months, so Ford is certainly active with development. If this debut rumor turns out to be true, we only have two more months to wait for full disclosure on what could be Ford’s last pure internal-combustion pony car.