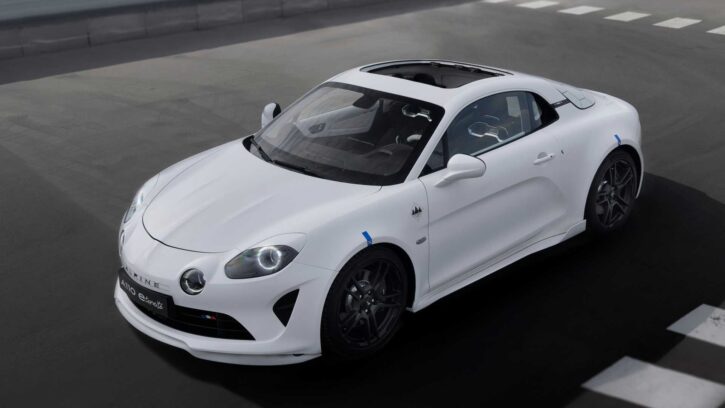 One year after Renault Group CEO Luca de Meo said he wanted to “electrify Alpine to preserve its name for all eternity,” Alpine engineers and designers turned the idea into a reality, and even made the A110 topless in the process.

The all-electric A110 E-ternité, created to celebrate the brand’s 60th anniversary, is a sample of the work that’s currently being implemented by Alpine in developing its range of all-electric models as it moves towards becoming a 100% electric brand.

Developed in the restomod spirit, the A110 E-ternité Concept is described as “a bridge between a prestigious past and an even more ambitious future.” Surely, it’s not easy to electrify a lightweight and agile sports car on a realistic budget while maintaining its dynamic qualities, but Alpine engineers claim they did it.

Using the battery modules from the Renault Mégane E-Tech, engineers managed to achieve optimum weight distribution between the front and rear axles—42:58—by placing four modules at the front and eight at the rear. For that, they had to design specific battery casings and adapt the internal architecture.

In addition to the battery modules, the A110 E-ternité also received an innovative gearbox: a double clutch transmission (DCT) with an electronic control as on the combustion engine-powered A110, but with clutches dimensioned to handle high torque values.

To offset the added weight of the battery pack, Alpine used lightweight, environmentally friendly materials like flax fiber on some key parts, such as the skin of the bonnet, roof, rear window, grille, seat shells and rear skirt. In addition, Alpine used two roof shells injected with recycled carbon to give the A110 E-ternité an open roof; it’s basically a removable roof section that doesn’t compromise the body’s structural rigidity.

Other highlights include an innovative multimedia system using the driver’s personal tablet and an 8-speaker audio system with a subwoofer and surround sound.