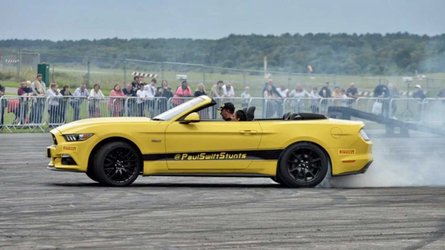 The 2022 British Motor Show kicks off on August 18, but this won’t be a typical automotive event. In addition to a slathering of new vehicles on display, there are dedicated areas for supercars, classic cars, electric cars, and for those seeking some motoring action, there’s an outdoor arena. That’s where the show will attempt not one, or two, but three Guinness World Records. And they aren’t exactly well-known.

Well, one record might have some prominence. Parallel parking is a source of pure frustration for some, while others revel in the challenge of fitting like a glove. Here’s where the outdoor arena comes in, as stunt driver Paul Swift will attempt to set a new Guinness World Record for the tightest parallel park. Actually, the specific record is the “tightest parallel park by electric car,” so apparently there’s also one for a fuelie? In any case, the record stands at 20 centimeters or 7.8 inches. Like a glove, indeed.

That’s not the only record Swift will be shooting for, and the second one is decidedly more obscure. How many donuts can you do in a car in one minute? Now, add a motorcycle doing a wheelie and you have the challenge: most donuts in a car around a motorcycle doing a wheelie. Six is the number to beat, which means yes, someone has done this before. Swift will attempt the record driving a Ford Mustang, which could complicate things because we know how Mustangs love to crash into people.

The final record is where everyone at the show has a chance to participate. It doesn’t involve stunt driving, just a camera and an internet connection. Show organizers hope to set a record for the most photo uploads of people with the same car to Facebook in one hour. Once again, a Ford Mustang will be involved, though with it being stationary, here’s hoping it doesn’t get hungry. There isn’t a benchmark mentioned for this particular record, so perhaps it’s obscure enough to be brand new.