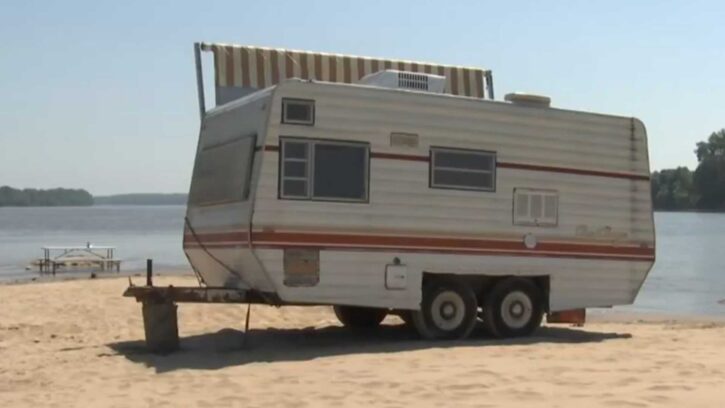 We all know that motorhomes, camper trailers, and overlanding adventures have been on a major upswing in recent years. Folks are embracing a nomadic life all over the place, though we’ve never seen someone drop a camper trailer on a narrow sandbar in the middle of a busy river.

Apparently, the folks near Evansville, Indiana haven’t seen it either. Local news stations report the old camper just showed up on a sandbar in the Ohio River on July 21, with no clues whatsoever as to how it got there. Furthermore, there’s no indication of who owns it or if it’s even habitable. Several videos posted to YouTube show the exterior of the camper, which certainly looks like it’s seen better days. Nothing has surfaced regarding the inside, and it appears nobody is staying there.

The weird camper-in-the-river is attracting attention, however. This sandbar is located in a rather popular section of the Ohio River right next to Evansville, a city with a population of 118,000 people. As such, people have been flocking to the beach and taking boats to the sandbar to see the curious camper in person. As of this article posting on July 27, it is still there and nobody has claimed responsibility.

Perhaps that’s because government agencies are investigating the matter. The U.S. Army Corps of Engineers is looking into possible violations of the Rivers and Harbors Act of 1899, specifically with regard to structures that could become obstructions in the river. If that’s not bad enough, this portion of the Ohio River serves as the border between Indiana and Kentucky. As such, the Kentucky Fish and Wildlife department as well as the Indiana Department of Natural Resources are looking into the matter. Even the U.S. Coast Guard is involved.

The general public, however, doesn’t seem to mind its presence on the river. That could be because this actually isn’t the first time something has mysteriously appeared on the sandbar. 14 News says someone managed to park a pickup truck at the same location five years ago, filling the tires with helium to get it across the river.