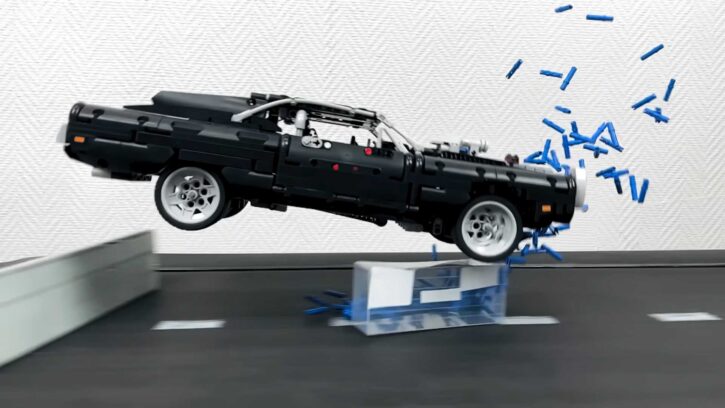 We interrupt your daily dose of supercars, vehicle debuts, and first-drive reviews with some not-breaking news. We mean that literally, as this Lego Technic representation of Dom’s black Dodge Charger from The Fast and the Furious refuses to come apart despite some serious abuse on a treadmill. Wait, what?

Lego crash tests are something we see from time to time, but it’s a big deal on the Lego Life channel on YouTube. There are numerous videos featuring everything from Lego pickup trucks to eight-wheeled off-roaders, construction equipment, and even a few Batmobiles. The Charger clip was published on July 22; it caught our attention as it flew through the air in a preview so of course we clicked through to see the carnage. Imagine our surprise, however, when there was none. Well, almost none.

The test starts out easily enough, rolling on the treadmill in a mock race with the latest Batmobile at just a few mph. Things ramp up from there with chunky speed bumps dropped onto the conveyer, but the deluxe Lego Technic kit features a functional suspension that absorbs most of the impact. The treadmill speed is increased to 14 mph, which doesn’t sound like much but in the context of a 1:13 scale car, that’s not far from 200 mph. And remember, this is a car made of click-together plastic brinks.

From there, the test actually ramps up with jumps of various sizes dropping onto the treadmill. To make it a bit more dramatic, trays of blue Lego Technic pins are added like proverbial fruit stands during a Hollywood car chase. The black Charger jumps, crashes through pins, jumps and crashes some more, lands, and keeps on rolling. This Technic kit is rather complex with working suspension, steering, and an engine featuring moving pistons and a spinning supercharger, but the brick explosion we keep waiting for never comes. The only damage sustained is a section of the gray grille coming off on the passenger side after the final jump.

Dom’s Dodge Charger was released as a Lego Technic kit back in 2020. Barring any unknown modifications to this car, perhaps the indestructible mythos of the Fast franchise extends to the Lego universe as well.