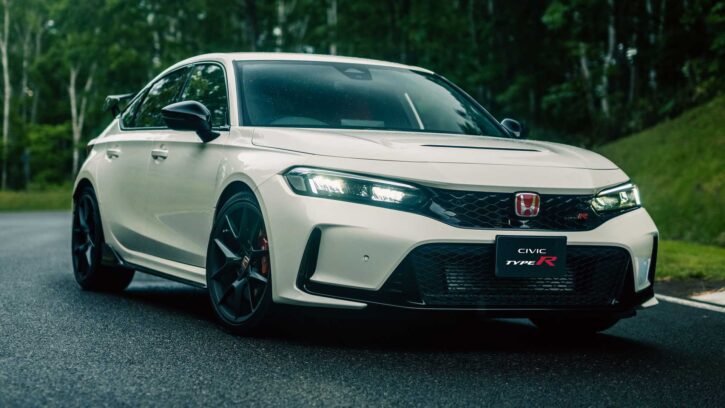 Honda unveiled the new Civic Type R last week with a tried-and-tested hot hatch formula by combining a turbocharged gasoline engine with a six-speed manual gearbox and front-wheel drive. It thus put an end to those rumors claiming the FL5 model would go hybrid and even adopt AWD. However, there might’ve been some truth in those reports after all, at least when it comes down to the electrified powertrain.

Speaking with Autocar, Honda Motor Europe technical advisor Ko Yamamoto said the Civic Type R’s platform can support electrification. While he ruled out the possibility of a fully electric CTR based on the current platform, he did leave the door a bit open for a hybrid setup further down the line:

“I wouldn’t exclude electrification. We can’t do a pure electric powertrain on this platform, but I imagine it can take up to a certain level of plug-in hybrid. Electrification is just another technical measure, like VTEC or a turbo, or multi-link suspension.”

Asked whether an all-wheel-drive CTR is on the cards, Ko Yamamoto said it’s definitely not on the agenda. Even though it is technically possible since the car shares its platform with the CR-V, the technical advisor doesn’t see the benefits: “It’s not even necessarily quicker, but it is heavier.”

Recent intel suggests the 2.0-liter gasoline engine makes 10 hp and 15 lb-ft (20 Nm) more than before while an optional carbon fiber wing shaves off 1 kilogram (2.2 pounds) on the JDM-spec Civic Type R. As you have probably heard, Honda is installing smaller wheels but with wider tires by going with a 19-inch set wrapped in 265/30 Michelin Pilot Sport 4S.

There are still quite a lot of technical specifications we don’t know, and we can say the same about the essential pricing info. Honda will clear up the mystery in the coming months as the 2023 Civic Type R goes on sale in the United States this fall.