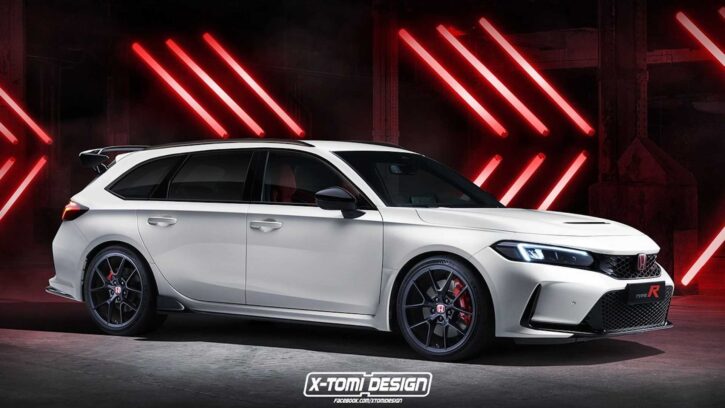 Ever since the Honda Civic Type R’s introduction in 1997, the red-badged performance car has always been available as a hatchback – mostly as a three-door then as a five-door from 2015 onward. That’s, of course, with the exception of the FD2 in 2007. For the first time, the Civic Type R was sold as a sedan based on the eighth-generation model, exclusively available in Japan.

But one thing’s for sure – the Civic Type R was never sold as a station wagon. Now that the 2023 Honda Civic Type R FL5 is out and about, X-Tomi Design imagines the impossible – a Civic wagon with performance bits and the coveted red badge.

X-Tomi Design’s interpretation of the Civic Type R FL5 is shown atop this page. The unofficial rendering shows an extended roof to give the compact car a more upright rear windshield. There’s added practicality too, seen on the pair of roof rails and the added cargo volume on the record-setting Honda.

Although, one can argue that this is just a regular hatchback rather than a wagon, and we tend to agree on that point. But with the understated sporty character that can match the Audi RS4 Avant’s aggressive demeanor, we’re not complaining at all.

To be fair, the regular Honda Civic was available as a station wagon until its ninth-generation model. Sold as a Touring model in Europe and other parts of the world, Honda stopped making an estate version with the tenth-generation model. We don’t expect a long-roof version coming back anytime soon, more so one with a Type R badge.

But in the off-chance that a Civic Type R wagon makes a surprising debut in the years to come, will you consider buying one? BMW did so with the first-ever M3 Touring; maybe it’s time for Honda to consider making one, too.