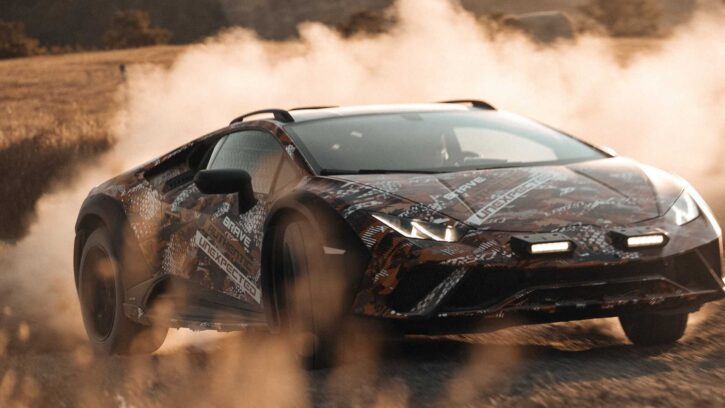 It was back in June 2019 when Lamborghini signaled its intentions toward doing a more adventurous Huracan by unveiling the Sterrato concept. It didn’t take too long before reports started to emerge about a potential production version, and those rumors gained more traction early this year when spy photographers caught the high-riding supercar undergoing testing. Fast forward to today, the first official teaser has been released.

In a video featuring a car vs bike duel à la Top Gear of yesteryear, the Huracan on stilts features roof rails and a generous ground clearance to tackle bumpy roads. It’s also hard to miss the plastic body cladding tacked onto the fenders, lending the naturally aspirated V10 a rugged look. The extra lights at the front and roof scoop make the Sterrato stand out furthermore. By the way, the concept’s name will be carried over for the production model.

The bespoke livery refers to the outdoorsy Huracan as being “brave, authentic, and unexpected” while the video shows a well-protected underbody to better handle rough terrain. Redesigned side air intakes are also on the menu for the go-anywhere supercar, as are reshaped bumpers and rear louvers. We can also presume there will be a recalibrated all-wheel-drive system and a toughened-up suspension.

We’ll remind you the namesake one-off sat 1.85 inches (47 millimeters) higher on bespoke 20-inch wheels attached to wider front and rear tracks. The Sterrato concept was based on the Huracan Evo with its 640-horsepower V10, complete with AWD, torque vectoring, and all-wheel steering. We are pleasantly surprised this subsequent production version looks an awful lot like the concept.

Sterrato will follow the road-going Tecnica and the track-only GT3 EVO2 and could very well be the Huracan’s swan song. Lamborghini has already confirmed the replacement will be a plug-in hybrid based around a combustion engine with more than six cylinders but fewer than 12.

The Lambo Sterrato is not the only off-road-ready supercar from the VW Group as Porsche is putting the finishing touches on a 911 Dakar / Safari.