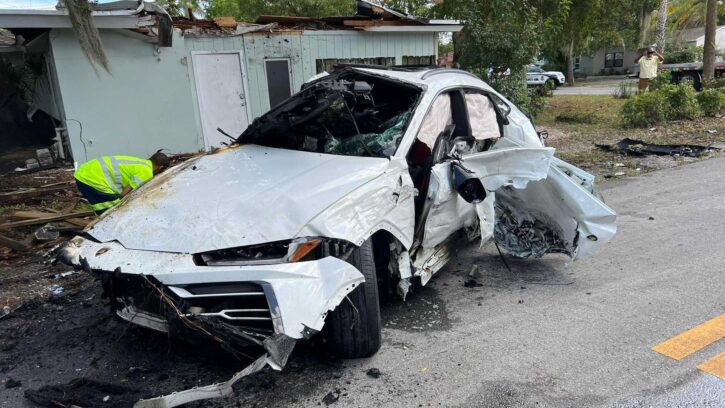 A violent car crash disturbed one Fort Lauderdale neighborhood earlier this week when a rented 2021 Lamborghini Urus ran a stop sign. It was traveling at a high rate of speed when a Nissan Pathfinder T-boned the Urus, sending it flying into the air and landing on a nearby house before it tumbled to the ground and burst into flames.

Photos posted to Facebook by the Fort Lauderdale Fire Rescue reveal the devastation. There’s significant damage to the duplex’s roof, which thankfully occurred over an unoccupied portion. Residents who heard the accident ran to help, with one person pulling the Lamborghini Urus driver free from the wreckage. However, the driver didn’t wait for medics or law enforcement to arrive.

The driver, identified as 24-year-old William Dion McQueen Jr. by the Miami Herald, allegedly took off running from the scene without shoes after the accident. Fort Lauderdale Fire Rescue units arrived shortly after that to put out the fire and clean up the accident. One person involved in the crash suffered minor injuries.

WSVN is reporting that police know who the driver is and that he’s cooperating with the investigation. The driver claims that he didn’t flee the accident but was dazed and confused from the crash. He ended up at the hospital and called the police to deny he intentionally left the scene.

According to the Miami Herald, the police report says that the Nissan had the right of way. However, the report doesn’t note that the Urus was speeding or that it ran the stop sign. However, surveillance footage from a nearby residence captures the Urus traveling at a high rate of speed when it ran the stop sign at the intersection.

The paper also reports that the police labeled the crash report as a hit-and-run. However, they would not divulge whether the driver is facing any charges or if police have arrested him. It seems like some accountability is needed for such a serious accident. Thankfully, nobody was hurt, but there could have been a much worse outcome.