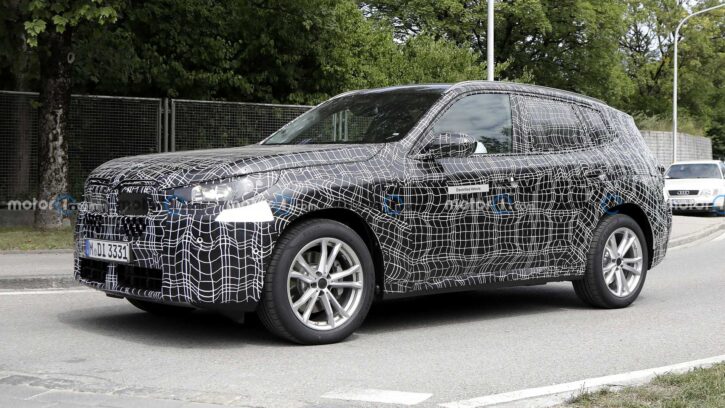 BMW is prepping a new generation of the X3 SUV, and that includes electrification. We’ve seen quite a few camouflaged prototypes already, despite our first sighting happening barely a month ago. However, this is the first time we’ve caught an X3 plug-in hybrid out and about.

Our spy team captured two X3 test vehicles here, but our attention is focused on the electrified model. Among other things, it literally says electrified on the side so we know it’s a hybrid model. Beyond that, we can confirm it’s a plug-in hybrid thanks to the up-close view provided by our photographer. Zooming in on the driver-side fender, it’s very easy to see the outline for the charging door in the camo wrap. This matches the placement on existing BMW plug-in hybrid models such as the X5.

The crisp images also give us a clear look at the X3’s face. A tight crop reveals the outline of the grille despite attempts to hide it with wrap and false panels. It will grow slightly, but perhaps not as much as you’d expect. The base of the grille sits comfortably above the license plate, leaving room for a fairly large division to the vents on the lower fascia.

An even tighter crop at the corners reveals circular patterns behind the wrap. It could be a ruse, but it might also point to a less-chiseled face with some round openings instead of boxy vents and odd angles. Similar features are seen at the rear, though we also see angular lines in the number plate area. Placeholder taillights remind us that we’re still early in the testing process, at least in terms of testing in public.

Speaking of which, our sources are telling us a late-2023 timeframe is likely for a debut. That’s over a year away at this point, which means the next-generation X3 will probably be a 2024 model. Depending on the specific timing of the debut and production schedule, that could also fall to 2025.

Keen for more BMW chat? Check out the Rambling About Cars podcast, available below.