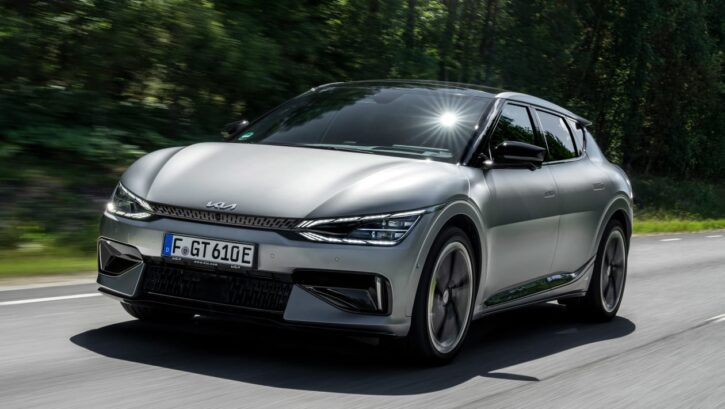 The new EV6 GT can be viewed in two ways: as an exclusive, expensive and exceptionally engineered Kia, or as a cheaper, better value, but almost as entertaining Porsche Taycan rival. It’s hard to ignore that the standard all-wheel drive EV6 represents better value for money, but for the handful of buyers that are willing or able to take the jump with this EV6 GT, they won’t be disappointed.

Next in line for a performance-car boost is the Kia EV6, with this flagship GT model, which has been given a once over by former brand R&D chief turned Executive Technical Advisor, Albert Biermann.

He’s the man we sat beside when we were treated to a passenger ride in a prototype version of this hot EV6 back in the spring. Even though we weren’t able to drive the car at the time, Biermann was keen to demonstrate the GT’s superior all-round ability; “The idea with this car is for it to be a fast car, but not necessarily a true high-performance model”, he told us. “That’s not what the EV6 GT is about; the clue is in the name. It’s a fast grand tourer.”

But now, finally, we’ve been thrown the keys to a late-stage prototype. It’s as good as production-ready, though, so aside from the very slightest rattle or squeak, this is representative of cars customers will take delivery of from October this year.

On paper, Kia’s flagship has a spec sheet worthy of much more expensive machinery. In fact, with 577bhp, 740Nm of torque and a 0-62mph time of just 3.5 seconds, it has the numbers to rival Porsche’s Taycan GTS; a car that costs much more than £100,000.

It’ll come as no surprise, then, that the EV6 GT is Kia’s most powerful production car to date. But a car with this much punch needs a specific set-up, and the GT gets adaptive suspension, a limited-slip differential and uprated brakes.

At first glance, the EV6 GT doesn’t look all that different to the standard car. The design is perhaps slightly more aggressive – big 21-inch wheels cover those new brakes, partly disguising a set of acid green callipers. There’s a sharper body kit and redesigned bumpers, plus contrasting stitching on the inside. But truth be told, that’s pretty much it.

Sitting behind the wheel, you’re greeted by further green detailing, including piping for the seats and a GT drive mode button on the steering wheel. That, as you’d expect, dials in the Kia’s sharpest settings, serving up the full 577bhp and 740Nm of torque and relaxing the stability control for a more playful character.

But before we unleash the EV6 GT’s potential, we get a chance to try the saloon car both on urban roads and at higher motorway speeds. It’s surprisingly comfortable around town; up the pace a bit and it remains resolutely tied down. It’s perhaps not as quiet as we might’ve hoped – both compared with conventional petrol GT cars, as well as other long-range EVs – but the ride is pretty fluid, even if road noise is particularly noticeable over rougher surfaces; the bigger wheels and wider tyres don’t do the EV6 GT any favours in this regard.

It’s also slightly disappointing to see a grand tourer such as this suffer so much when it comes to range. There’s no escaping the fact that those wanting to cover big distances will be better served by the standard all-wheel drive car – that version’s 314-mile maximum range is almost 20 per cent greater than the GT’s. Still, both cars can charge from 10-80 per cent in just 18 minutes, so you won’t spend too much time topping up.

In faster, sweeping corners the EV6 GT shows itself in a brighter light. Kia’s E-GMP platform is a great starting point, and adding an additional 256bhp has done it no harm whatsoever.

Power delivery is instant. Plant your foot and the EV6 GT pins you to your seat, the speed building at an alarming rate.

Thankfully, Kia’s excellent i-Pedal set-up allows for genuine one-pedal driving. In fact, Kia claims that in its strongest setting, when combined with the conventional discs and pads, the system can effectively send power back to the battery at a faster rate (up to 300kW) than the quickest ultra-rapid chargers; the GT’s maximum charge rate stands at 240kW.

The intuitive regenerative braking only adds to the thrill on tighter, twistier roads. Being able to modulate your inputs and not having to switch from accelerator to brake results in seriously swift progress.

The steering is well weighted, and the reworked adaptive suspension means body control is perfectly judged. The GT is nine per cent softer at the front and 11 per cent stiffer at the rear – the former improving turn in, and the latter reducing pitch under hard acceleration; the car doesn’t stay completely flat, but the small amount of movement only adds to the engagement. Quick changes of direction are no trouble at all.

Elsewhere, away from the prodigious power and performance, the EV6 GT remains a usable and practical family car. The boot is a decent shape and size, and there is storage in the nose for the charging cables.

Cabin layout and quality – even in this prototype – remains strong. While we’d prefer the touch-sensitive climate control panel to be a little less fiddly, the infotainment system is intuitive, the graphics are crisp and the screen is responsive. The digital driver display offers plenty of information, and you can adjust the view to show the most important data.