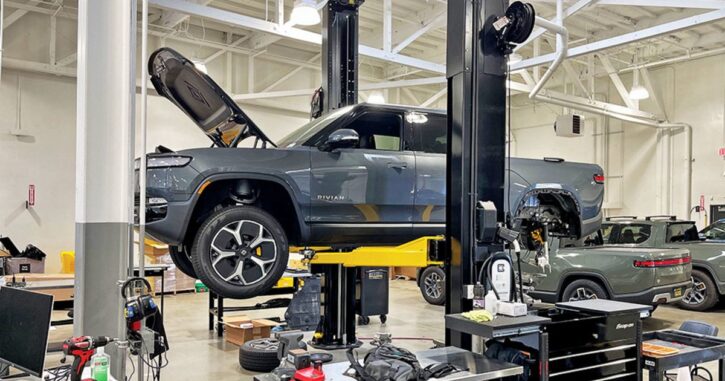 Rivian is gearing up for the task, with 21 service centers now open in U.S. metropolitan areas, such as Atlanta, Chicago, Denver, Houston, Las Vegas and Orlando. Half a dozen more are planned by the end of the year, the automaker said. Its first service facility outside the U.S. — in Vancouver, British Columbia — opens in the fall.

Although the Irvine, Calif., automaker announced layoffs last week of about 6 percent of its work force, it said it will continue hiring for service positions and spare factory workers.

Rivian doesn’t have traditional retail locations. Rather, its first “Rivian Hub” in Venice, Calif., near Los Angeles, serves as a community center for events and an experience center for Rivian products.

“A lot of people will prefer for us to go to their home or place of business rather than come over here,” Tomafsky said. “We’re going to alleviate that pain point,” particularly the crushing traffic during long stretches of the day in the area.

Rivian vehicles, with over-the-air updates, can also be fixed with software alone sometimes. And because they are connected to the cloud, some diagnostic services can be done remotely, making in-person repairs faster.

The South San Francisco location will get relief from a Rivian service center in San Jose scheduled to open this year. The greater Silicon Valley area remains the heart of the EV industry — with Tesla’s factory in Fremont and Lucid’s headquarters in Newark.