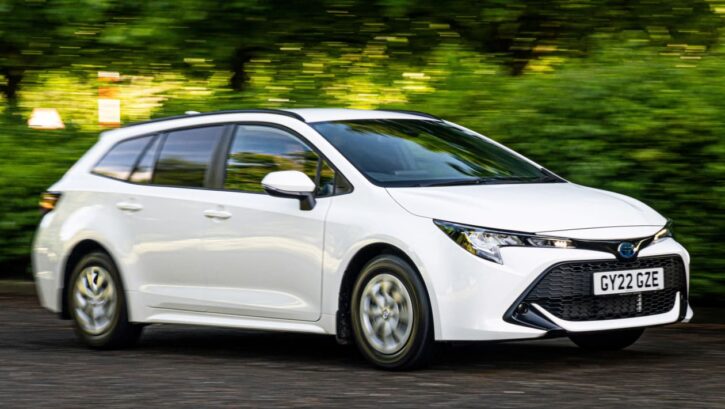 ​The Toyota Corolla Commercial is a vehicle for the moment: it fills a very specific niche within the commercial vehicle sector, so much so that it’s the only model of its type that’s currently for sale. If you’re looking to reduce your fleet’s emissions, but can’t quite justify the switch to electric because you need a vehicle that’s able to cover a long distance at short notice, then it’s well worth considering.

The limited payload capacity won’t suit some applications, but on the other hand, you’re getting a work vehicle that’s just as smooth, refined and easy to live with as a Toyota Corolla Touring Sports estate, but with a work-biased interior that will handle the heavier use that commercial vehicles must withstand.

About the Toyota Corolla Commercial

If there’s one vehicle that springs to mind when looking at the Toyota Corolla Commercial, it’s the Vauxhall Astravan. Bear with us here, because not only is this new-for 2022 Toyota a spiritual successor to the Astra-based van, it turns out the Astra was the inspiration behind it.

Bosses at Toyota GB, keen to expand the product portfolio of the Toyota Professional commercial vehicle brand, saw an opportunity. The Astravan used to be a fairly common sight on UK roads, but it disappeared from the Vauxhall range in 2013, leaving the car-based van sector to supermini-sized models, such as the Vauxhall Corsavan and Ford Fiesta SportVan. With no larger model on offer, buyers were forced to move to small vans instead.

However, some companies went their own way with van-style conversions of hatchbacks, SUVs and compact estate cars, so Toyota clearly saw demand for an off-the-shelf estate-based van. Numbers were crunched, a business proposal was put forward, and while the previous-generation Auris Touring Sports was considered for conversion, Toyota waited for the higher-spec Corolla to start manufacture in the UK before being transformed into a work vehicle.

At the moment, the Corolla Commercial is a UK-only model – other markets are being evaluated – and it comes in a single specification. It’s based on the 120bhp 1.8 hybrid version of the Touring Sports, while the spec list is similar to that of the entry-level Icon trim. That means you get kit such as one-touch electric windows, LED headlights, dual-zone climate control, Toyota Touch 2 infotainment with Apple CarPlay and Android Auto, a reversing camera, plus Toyota Safety Sense with adaptive cruise control and a suite of safety kit. The only real difference is the inclusion of steel wheels with plastic trims in place of alloys.

To meet UK construction and use regulations, it must be impossible for any car-based van to be converted back to a passenger vehicle. As a result, the Corolla does away with the folding bench seat, the doors lose their electric window mechanisms and while the internal door releases are present, they’re purely aesthetic, because you can’t open the back doors from the inside. It’s a similar story with the driver’s electric window switches – the buttons for the rear windows are present, but they don’t work, and are there to fill holes in the trim.

At least the rear interior lights still work, because they shed light lost with the addition of the fully opaque side windows. These comply with the letter of the law, with a thick, matt film added to the standard glass. They’re finished in black, so the Corolla Commercial still looks like the Touring Sports estate from the outside – it was felt that using body-coloured film might draw the wrong kind of attention to a vehicle that is likely to have valuables left in it. There’s still a clear glass tailgate with wash/wipe, though.

With an introductory finance offer of £261 per month including maintenance (with tyres and brakes) for three years via Toyota’s Kinto finance scheme, the Corolla Commercial could be a tempting proposition.

One big benefit of using the Corolla platform is the efficiency of the hybrid drive system. Toyota quotes a WLTP economy figure of 61.4mpg, and the Corolla Commercial favours electric drive that makes that figure entirely feasible in everyday driving.

In fact, during the first few days of driving a Corolla Commercial, which involved a mix of driving and a lot of stop/start traffic, we had the mpg figure in the high 60s, before extended motorway driving lowered the average over after covering around 500 miles brought that down to a still impressive 59.5mpg. The CO2 figure according to the WLTP cycle is 105 – 115g/km.

A full tank delivers the promise of a range in excess of 650 miles, which will be a major attraction for buyers who want to reduce their carbon footprint, but can’t quite justify the switch to a full EV because they cover long distances at a time.

The Corolla Commercial comes with a three-year, 60,000-mile warranty, however, it’s possible to stretch this much further. After the three-year period is up, Toyota will extend the warranty by 12 months/10,000 miles each time it’s serviced by one of its dealers, up to a limit of 10 years and 100,000 miles.

Since it’s in the ‘Toyota Professional’ range of light commercial vehicles, you also get five years of roadside assistance and a guarantee that you’ll be booked into a service appointment within seven days. Service intervals are the same as the passenger version of the Corolla, at every 10,000 or annually – whichever comes first.

The most obvious change to the Corolla Commercial from the driver’s seat is the addition of a steel mesh bulkhead that divides the cargo area from the cab. In some vans – even purpose-built models – this type of bulkhead can limit how far back you can slide the driver’s seat, making it hard for tall drivers to find a comfortable driving position. But here there’s plenty of adjustment. In place of the original fabric front floor mats are now more durable rubber items.

The now-empty rear features a long-flat load area with a heavy-duty plyboard floor covered in a grippy rubber topper. This is bolted in place against the bulkhead, but the rear half is hinged, so there’s a deep spare wheel-shaped well hidden under the floor. This is very useful, but while some other SUV and car-based commercials add further storage where the rear footwells used to be, the Corolla’s are tricky to access, as they’re partially covered by the new load bed. It’s also worth noting the hinged half of the load area can noisily jump up and down when negotiating bigger speed bumps if the back is empty.

Overall cargo capacity is 1.3 cubic metres (1,326 litres), while there’s a payload of 425kg. In comparison, the 1.8 hybrid Touring Sports has a payload range of 405-535kg depending on spec, although of course, you’re running the risk of damaging interior materials if you’re planning to use one of these as a work vehicle.

The boot opening of the Corolla is a good shape and size, and the body shell doesn’t have a sloping roofline like some more style-conscious estate cars, so we found loading the car with bulky items very easy. The lip of the load bed protrudes quite far and should do a good job of protecting the bumper, but some of the paint is left exposed, potentially leading to scratching if you’re not careful.

The towing weight for the Corolla Commercial is the same as for the Touring Sports, at 750kg.

On the road, the Corolla Commercial is just as simple and easy to drive as the passenger versions. It fires up silently when there’s enough charge in the hybrid battery, and the system is quiet as you’re driving along. Due to the nature of the continuously variable transmission (CVT) it can get noisy under hard acceleration as the revs rapidly rise, although doesn’t really happen that often, while the van favours electric drive in most circumstances.

In any case, the updated 1.8-litre Corolla – which we’ve driven in prototype form – is much better resolved in this regard, with its engine and gearbox responses feeling much more attuned to throttle inputs. It develops more power and torque, too. It’ll be due in 2023, and although this hasn’t been confirmed, we see no reason why the refreshed Touring Sports version won’t get this same Commercial treatment.

At higher speeds, there’s a bit more of a booming sound that resonates through the open cargo space, but this varies according to the roughness of the road surface you’re on. Overall, the Corolla Commercial is a more comfortable option than a small van, thanks to its car-derived suspension set-up, as well as the inherently sporty nature of Toyota’s TNGA platform.

Although chassis dynamics will be very low down on the priority list of the average light commercial vehicle owner, it’s worth noting that the car is happy changing direction quickly, is more than resistant enough to excessive body roll, and is on the whole a fun thing to drive.

In the 2022 Driver Power survey, the passenger version of the Corolla finished an underwhelming 38th out of the top 75 new cars, with a lower-than-expected reliability ranking – the car finished in 33rd place. However Toyota as a brand – which finished 10th out of 29th manufacturers – had one of the best reliability ratings in the survey, with only 16.2 per cent of owners reporting an issue with their cars.

The Corolla Commercial hadn’t been crash tested by Euro NCAP at the time of writing, but the organisation gave the passenger Corolla the full five stars in 2019, scoring it 95 per cent for adult occupant protection.

Cabin quality is decent, with fabric upholstery for the heated seats (and powered lumbar support for the driver’s seat), some piano black trim on the dashboard and even a bit of metal trim here and there. Even the harder plastics feel like they’re built to last, while the seats are nicely supportive to make longer drives very comfortable. Once you’re attuned to the increased cabin noise, it’s easy to forget you’re not just in a regular Corolla.

The instrument cluster is fairly basic, with analogue dials for the rev counter and speedometer next to a small multi-function display. However, the latter provides all the information you need and is easy to navigate. The climate controls are all of the physical variety – our preferred set-up – sitting below a pair of air vents. You also get a multi-function steering wheel with the same comprehensive array of buttons seen on the passenger Corolla.

The infotainment system isn’t the most responsive and looks a little outdated compared to some rivals, but again, in the likely event Toyota chooses to make the incoming facelift Corolla Touring Sports into a Commercial, this issue will be solved.