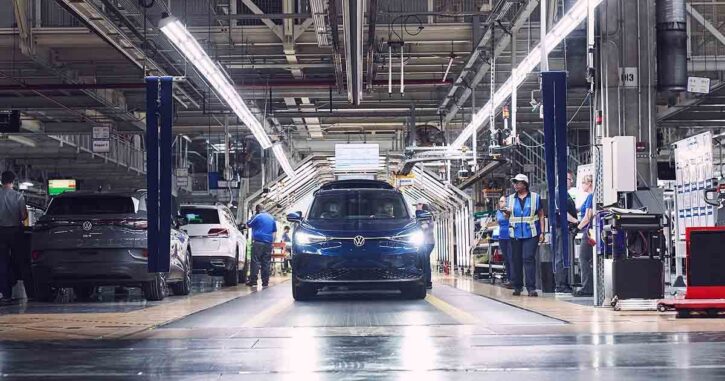 Volkswagen of America said it has started saleable local production of the brand’s ID4 compact BEV crossover at its assembly complex in Chattanooga, Tenn., and expects to be producing up to 7,000 vehicles per month there by the fourth quarter.

The German automaker, which has been doing pilot builds of the ID4 in the plant for much of this year, said Tuesday it would begin making customer deliveries “as early as October” while it ramps up further.

The local production, paid for by an $800 million investment in the plant, represents a three- or four-fold increase in ID4 availability for VW dealers in the U.S., compared with current versions which are imported from Germany, VW executives have said.

Through the second quarter, VW sold 4,415 ID4s in the U.S. — all imported — down 29 percent compared to its launch last year.

“We’re just starting to write a new chapter for Volkswagen in America, and it is very much an American story,” said Thomas Schäfer, global chairman of the VW brand, said in a written statement.

“When we promised to bring Volkswagen EVs to the millions, it always included American workers building those EVs right there in Chattanooga. We couldn’t be prouder to see that vision realized today with our ID.4 electric flagship rolling off the lines. This is another milestone in Volkswagen’s ambitious electrification strategy for the U.S. market and globally.”