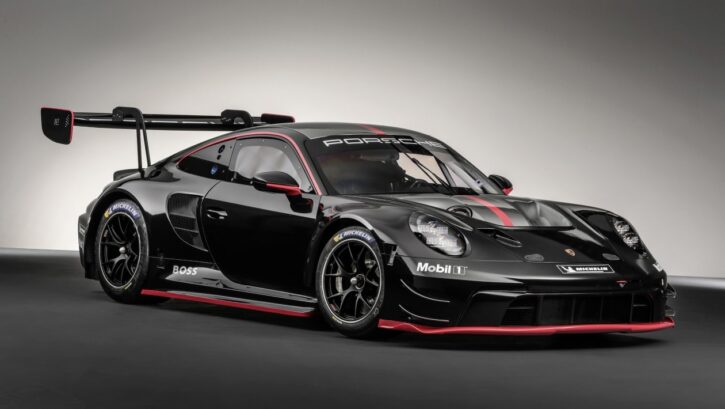 The GT3 racing series is hotly contested, with heavily reworked versions of road-going sports cars going door-to-door at circuits across the globe. Now, Porsche has pulled the wraps off its 2023 challenger: meet the new Porsche 911 GT3 R.

Given that the GT3 class uses a balance-of-performance system to minimise car performance advantages, Porsche’s engineers haven’t prioritised outright pace when designing the new GT3 R. Instead, they aimed to widen its performance envelope for more consistency on the track.

Key to this is the new flat-six engine, which has grown to a 4.2-litre unit for a broader spread of torque throughout the rev range. It produces up to 557bhp and remains naturally aspirated, but tilting it forwards by 5.5 degrees has allowed a steeper upkick for the rear diffuser, while certain ancillaries have been moved forward to mitigate the 911’s rear-biased weight distribution.

Like the road-going 911 GT3, the GT3 R gets double-wishbone front suspension that has been reworked for more steering precision and less tyre wear, and there’s a multi-link design at the rear. The rear axle has been shifted backwards 48mm too, taking load off the rear tyres for improved longevity.

Porsche has fitted KW dampers at each corner, and claims that some of the car’s suspension technology is derived from the 911 RSR which races in the GTE class above. The brakes are supplied by British firm AP Racing, with six-pot monobloc callipers gripping 390mm discs at the front.

Most of the GT3 R’s swollen body panels are carbon fibre, facilitating a 1,250kg base weight that’s lighter than the road car. The underbody has been aerodynamically optimised to reduce pitch sensitivity for more accessible performance, and the towering rear wing features swan-neck mounts to provide cleaner airflow along its lower surface.

Inside, the new GT3 R gets a carbon fibre steering wheel with a plethora of illuminated controls for on-the-fly adjustments. Porsche has also fitted a 10.3-inch digital dashboard, safety nets and an FIA-spec roll cage. The GT3 R is priced at €511,000 (around £430,000) before taxes.